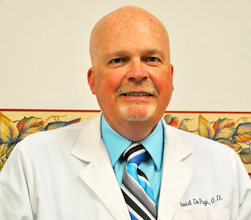 Dr. David DePugh, the founder and owner of New Boston Vision Center, graduated from The Ohio State University College of Optometry in 1983 and has practiced in New Boston, Ohio since that time. Dr. DePugh earned his Bachelor of Science degree in Physiological Optics in 1981, prior to obtaining his Doctorate of Optometry. While at Ohio State, he served as Vice President of Phi Eta Sigma Honor Society, was inducted into Beta Sigma Kappa International Optometric Honor Fraternity, and served as Clinical Instructor at The Ohio State University College of Optometry.

Dr. DePugh became licensed to use diagnostic pharmaceutical agents in 1986, which enabled better and earlier detection of eye diseases. He was then licensed in 1993 to use therapeutic agents in the treatment of eye diseases such as glaucoma and eye infections.

Dr. DePugh opened a practice in Ironton, Ohio in 1990, while still maintaining the New Boston office. He practiced in Ironton for 10 years before deciding to consolidate both offices in New Boston. With over 35 years of experience and having performed over 100,000 eye examinations, Dr. DePugh welcomes you and your family to trust The New Boston Vision Center for all of your eyecare needs.