Transformed. That is the best way to describe the property that has evolved into the New Boston Vision Center on Rhodea Avenue next toU.S Bank in New Boston. Dr. David DePugh and Dr. Jeremy DePugh recently built the new facility, and hosted a ribbon-cutting ceremony Wednesday afternoon.

“There were some old houses that were here, probably not even occupied if I remember,” Lisa Carver, executive director of the Portsmouth Area Chamber if Commerce said, as she stood in front of the new state-of- the-art practice. “It cleans up the area. It is a huge investment in the community. When you see how many employees he has. It means a lot in terms of cleaning the area up and the employment.”

Dr. David DePugh was smiling ear to ear as people complimented him on the new building and the internal facilities. “It’s going to allow us to do a lot better job at taking care of the patients, to see more patients, to bring in higher tech instrumentation 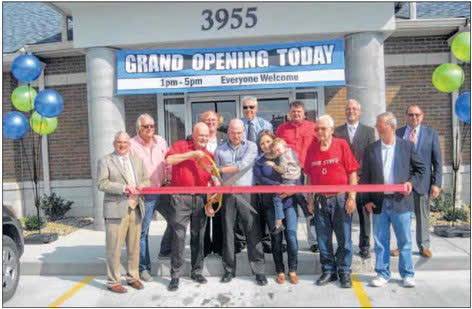 Dr. David DePugh is helped by his son, Dr. Jeremy DePugh to cut the ribbon at the newly-opened New Boston Vision Center on Rhodes Avenue next to U.S. Bank in New Boston.